Ian and Barry have released The ParaPod: A Very British Ghost Hunt!  It’s the first podcast to be made into a feature length film and follows the boys around some of the most haunted locations in the UK.
No spoilers here but our review is “It’s brilliant”, to coin a phrase.

The ParaPod: A Very British Ghost Hunt is now available to buy on ITunes, Amazon, Rakuten (if you’ve not managed to delete it) Google and Sky.

They are also holding screenings around the UK.  To find out if they are visiting your area and to buy tickets keep checking theparapod.com.

The early screenings all have an exclusive Q&A so go along and grill Ian and Barry about what you’ve just seen. 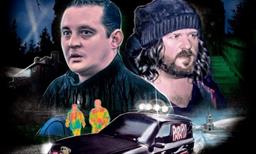 There a some  ParaPod podcasts from the boys to get you excited about the film and you can get to them on ITunes and Soundcloud.

Check out The Movie Grouch and Fanboy Podcast – an interview with Ian is here.

Their podcast about the film is here but is spoiler heavy so only listen after the film, you really don’t want any spoilers!

Barry’s Patreon and Ian’s have more info about content about the film, including deleted scenes, talk about the making/editing/sound and the stresses, strains of making and releasing a film.